How music surrounds us in the form of colours 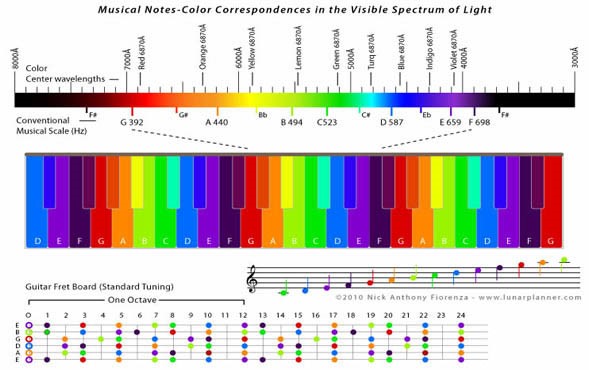 Universal Harmony is what nature thrives for.

The entire cosmos moves under this law.

Many great Musicians truly believed that their pens, as they composed, were guided by a divine spirit.

Now how do you define something that you cannot see?

The fact is that there are sound waves and vibrations even in the deepest of Silence. !

Every phenomenon in nature is what it is by virtue of its rate of motion and vibration.

Now these Universal Vibrations of Musical notes in the form of Electrical and Radio waves are at a very low frequency. When these sound waves vibrations, reach a very high frequency, they can be perceived as colours by the human eyes.

We are all enclosed in light every moment. The source is the WHITE LIGHT of the sun which splits into seven colours of the RAINBOW specifically for the purpose of being distinguished.

Between these Seven colours are a number of ultraviolet and infrared rays which are not visible to the human eyes.

Now the correlation is that,

In Music, be it any scale, a chord is a combination of First, Third and Fifth notes. These major chords are a basis for all other musical notes.

It is that if you could actually HEAR the high frequencies of Red, Yellow, and Blue light waves, you would hear a major chord.

Similarly, if you could actually SEE the sound note on a scale, they would have appeared in the form of series of colours (VIBGYOR)…, R being the root colour.