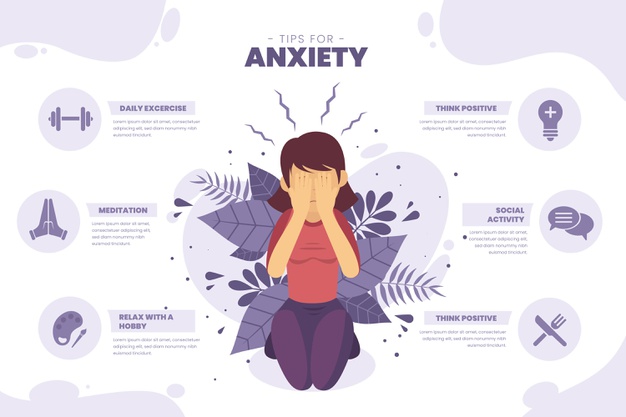 Anxiety encompasses feelings of worry, nervousness, or dread. Although unpleasant, occasional bouts of anxiety are natural and sometimes even productive By signalling that something isn't quite right, anxiety can help people both avoid danger and make important and meaningful changes.

But persistent, pervasive anxiety that disrupts one's daily life, whether at school, work, or with friends, can be the mark of an anxiety disorder.

According to the National Institutes of Health, and the condition strikes more women than men.

Anxiety disorders manifest in different ways, and are often diagnostically distinct. Generalized anxiety disorder is a chronic state of severe worry and tension, often without provocation. Panic disorder refers to sudden and repeated panic attacks-episodes of intense fear and discomfort that peak within a few minutes. Obsessive-compulsive disorder is marked by intrusive thoughts or compulsions to carry out specific behaviours, such as hand washing. Post-traumatic stress disorder may develop after experiencing or witnessing a traumatic event.

Anxiety is often accompanied by depression, and the two share an underlying genetic architecture.

Beyond genetics, childhood experiences such as early trauma or parental overprotection can play a role in forming an anxious disposition. In people with anxiety disorders, the brain circuitry that controls the threat response seems to go awry: The amygdala, a structure that detects danger, can become overactive, triggering a threat where none really exists.

Anxiety is often treated successfully using therapy, medication or both. Mindfulness meditation is another effective technique for some.

How to Recognize the Signs of Anxiety

Individuals suffering from anxiety may feel restless, on edge, and irritable. They may have difficulty concentrating or controlling their emotions. Physical symptoms can also include fatigue, trembling, trouble sleeping, stomachaches, headaches, and muscle tension.

Anxiety often involves worrying to an intense, excessive degree. Those worries can apply to any aspect of life, from social situations and family dynamics to physical health and professional concerns.

A person's angst or dread can be drastically out of proportion to the actual challenges he or she is facing. People may also irrationally believe that the worst-case scenario is inevitable.