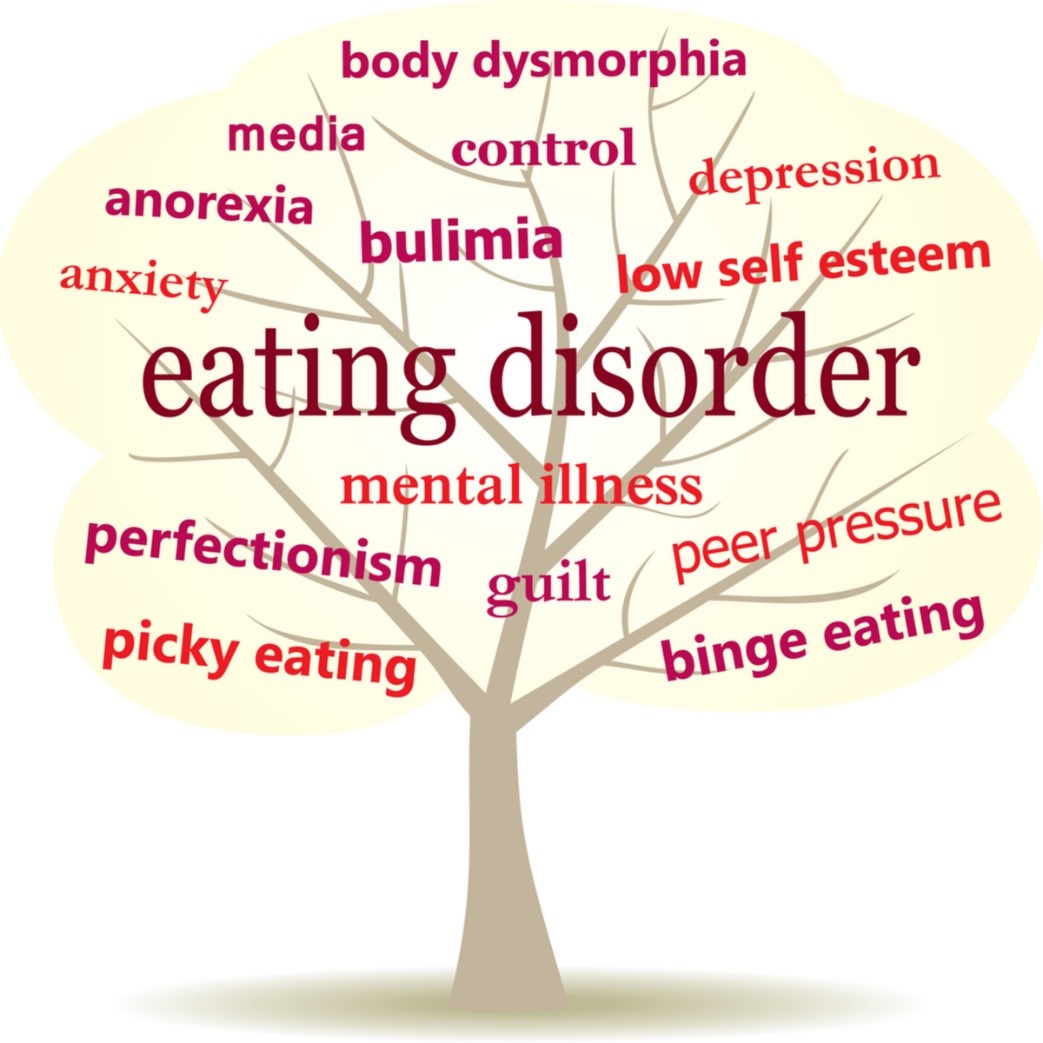 Eating Disorders describe illnesses that are characterized by irregular eating habits and severe distress or concern about body weight or shape.

Eating disturbances may include inadequate or excessive food intake which can ultimately damage an individual’s well-being. The most common forms of eating disorders include Anorexia Nervosa, Bulimia Nervosa, and Binge Eating Disorder

Although these conditions are treatable, the symptoms and consequences can be detrimental and deadly if not addressed. Eating disorders commonly coexist with other conditions, such as anxiety disorders, substance abuse, or depression.

The three most common types of Eating Disorders are as follows:

• Anorexia Nervosa-The male or female suffering from anorexia nervosa will typically have an obsessive fear of gaining weight, refusal to maintain a healthy body weight and an unrealistic perception of body image. Many people with anorexia nervosa will fiercely limit the quantity of food they consume and view themselves as overweight, even when they are clearly underweight. Anorexia can have damaging health effects, such as brain damage, multi-organ failure, bone loss, heart difficulties, and infertility.

• Bulimia Nervosa-This eating disorder is characterized by repeated binge eating followed by behaviours that compensate for the overeating, such as forced vomiting, excessive exercise, or extreme use of laxatives or diuretics. Men and women who suffer from Bulimia may fear weight gain and feel severely unhappy with their body size and shape. The binge-eating and purging cycle is typically done in secret, creating feelings of shame, guilt, and lack of control. Bulimia can have injuring effects, such as gastrointestinal problems, severe dehydration, and heart difficulties resulting from an electrolyte imbalance.

• Binge Eating Disorder- Individuals who suffer from Binge Eating Disorder will frequently lose control over his or her eating. Different from bulimia nervosa however, episodes of binge-eating are not followed by compensatory behaviours, such as purging, fasting, or excessive exercise. Because of this, many people suffering from BED may be obese and at an increased risk of developing other conditions, such as cardiovascular disease. Men and women who struggle with this disorder may also experience intense feelings of guilt, distress, and embarrassment related to their binge-eating, which could influence the further progression of the eating disorder.

Eating Disorders are complex disorders, influenced by a facet of factors. Though the exact cause of eating disorders is unknown, it is generally believed that a combination of biological, psychological, and/or environmental abnormalities contribute to the development of these illnesses.

Examples of biological factors include:

• Genetics (the tie between eating disorders and one’s genes is still being heavily researched, but we know that genetics is a part of the story).

Examples of psychological factors include:

Examples of environmental factors that would contribute to the occurrence of eating disorders are:

• Professions and careers that promote being thin and weight loss, such as ballet and modelling

• Aesthetically oriented sports, where an emphasis is placed on maintaining a lean body for enhanced performance.

• Cultural and/or peer pressure among friends and co-workers

Signs & Symptoms of an Eating Disorder

A man or woman suffering from an eating disorder may reveal several signs and symptoms, some which are:

• Chronic dieting despite being hazardously underweight

• Obsession with calories and fat contents of food

• Continued fixation with food, recipes, or cooking; the individual may cook intricate meals for others but refrain from partaking

• Avoidance of social functions, family, and friends. May become isolated and withdrawn

• Switching between periods of overeating and fasting

Treatment for an Eating Disorders usually comprises of complete care:

• Nutrition: This would involve weight restoration and stabilization, guidance for normal eating, and the integration of an individualized meal plan.

• Therapy: Different forms of psychotherapy, such as individual, family, or group, can be helpful in addressing the underlying causes of eating disorders. Therapy is a fundamental piece of treatment

• Medications: Some medications may be effective in helping resolve mood or anxiety symptoms that can occur with an eating disorder or in reducing binge-eating and purging behaviours.