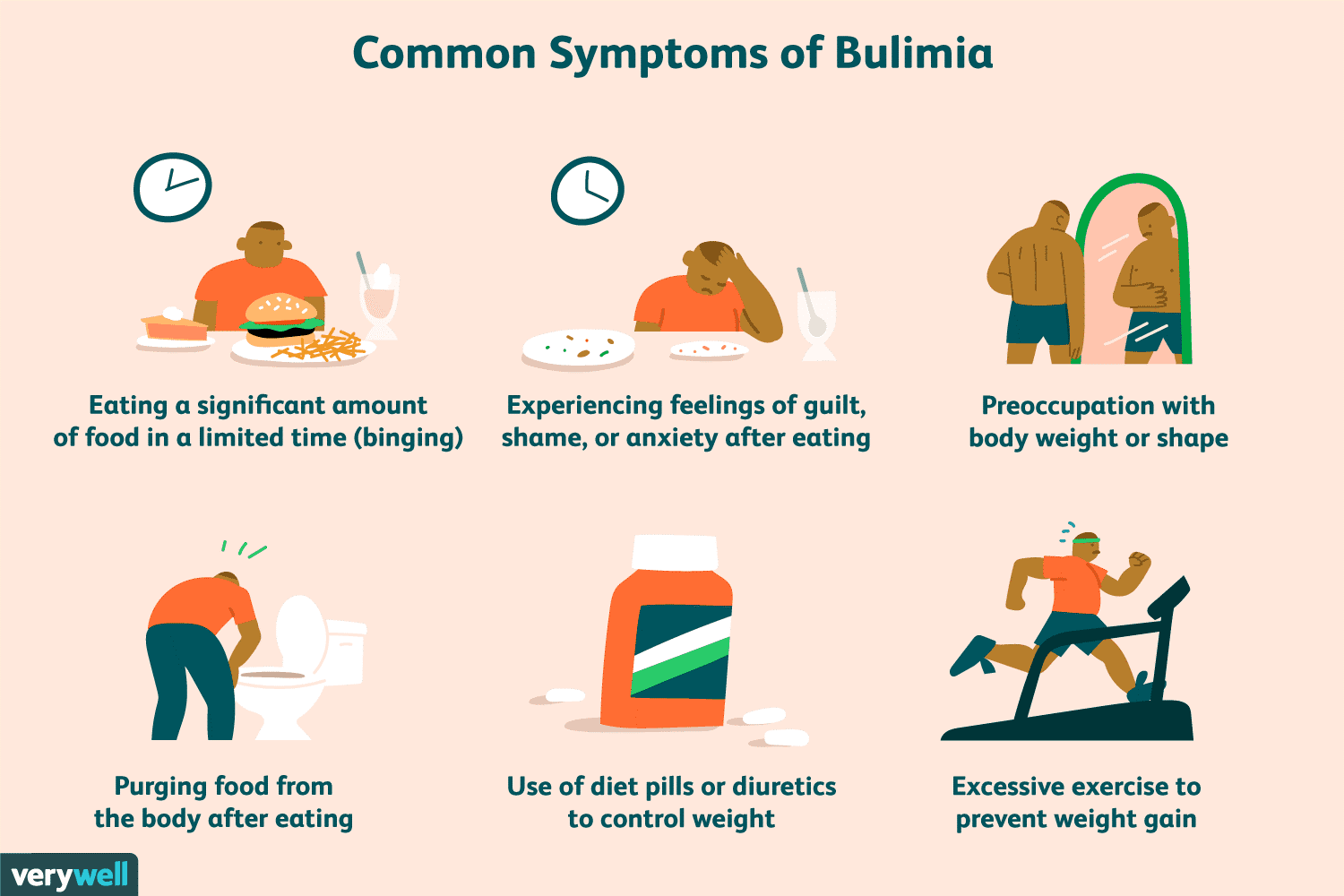 Bulimia Nervosa is a psychological and severe life-threatening eating disorder described by the ingestion of an abnormally large amount of food in short time period, followed by an attempt to avoid gaining weight by purging what was consumed.

Methods of purging include forced vomiting, excessive use of laxatives or diuretics, and extreme or excessive exercising. Often, in these binge/purge episodes, a woman or man suffering from this disorder will experience a loss of control and engage in frantic efforts to undo these feelings.

Since he or she may have bingeing and purging episodes in secret, they are often able to conceal their disorder from others for extended periods of time. Those suffering from bulimia nervosa often utilize these behaviours in an attempt to prevent weight gain, to establish a sense of control, and/or as a means of coping with difficult circumstances or situations.

There are two common types of bulimia nervosa, which are as follows:

• Purging type - This type of bulimia nervosa accounts for the majority of cases of those suffering from this eating disorder. In this form, individuals will regularly engage in self-induced vomiting or abuse of laxatives, diuretics, or enemas after a period of bingeing.

• Non-Purging type - In this form of bulimia nervosa, the individual will use other inappropriate methods of compensation for binge episodes, such as excessive exercising or fasting. In these cases, the typical forms of purging, such as self-induced vomiting, are not regularly utilized.

The exact cause of bulimia nervosa is currently unknown; though it is thought that multiple factors contribute to the development of this eating disorder, including genetic, environmental, psychological, and cultural influences. Some of the main causes for bulimia include:

• History of abuse or trauma

• Professions or activities that focus on appearance/performance

An individual suffering from bulimia nervosa may reveal several signs and symptoms, many which are the direct result of self-induced vomiting or other forms of purging, especially if the binge/purge cycle is repeated several times a week and/or day.

Physical signs and symptoms of this eating disorder are:

• Electrolyte imbalances, which can result in cardiac arrhythmia, cardiac arrest, or ultimately death

• Broken blood vessels within the eyes

• Enlarged glands in the neck and under the jaw line

• Oral trauma, such as lacerations in the lining of the mouth or throat from repetitive vomiting

• Inflammation of the oesophagus

Signs and symptoms of binge eating and purging are:

• Disappearance of large amounts of food

• Lack of control when eating

• Switching between periods of overeating and fasting

• Frequent use of the bathroom after meals

• Having the smell of vomit

Bulimia nervosa can also create problematic strains between the sufferer and family and friends, particularly as the individual has abnormal eating behaviours and/or the avoidance of social activities to engage in binge/purge episodes.

Since negative body image and poor self-esteem are often the underlying factors at the root of bulimia, it is important that therapy is integrated into the recovery process.

• Improving negative thoughts: The next phase of bulimia treatment concentrates on recognizing and changing irrational beliefs about weight, body shape, and dieting.